It has been 300 days since I landed in Singapore, on a mission to help set up Square Peg’s physical presence for Southeast Asia. This year marks eight years since our first investment in the region and we've been lucky to lead rounds in and partner with companies including StashAway, FinAccel, Doctor Anywhere, Neuron and more since then.

As I've gotten to know the ecosystem, I've observed first-hand the blindingly obvious: Southeast Asia is an ecosystem on the rise.

'Rising' as a statement may imply a lack of success, but that is clearly not the case, when you consider the 'initial wave' of tech titans regionally includes SEA Group, Grab and the newly minted 'GoTo'. SEA Group's valuation, as an example, has shot up from a 'mere' ~$5B in 2019 to ~$150B today; they employ >33k employees and run everything from an eCommerce marketplace (Shopee) to a Singapore Premier League side (Lion City Sailors FC). Undeniably, the 'initial wave' of regional tech companies have already delivered immense customer value and employment across Southeast Asia. But I believe that their real impact will be felt across the ecosystem for years to come–primarily as a catalyst for exceptional talent and capital.

And this is why I'm convinced the best days of the Southeast Asian ecosystem are a'coming and coming soon.

In the most evolved tech ecosystems globally, talent and capital move in dense, experienced circles.

In the US, the PayPal Mafia went on to build OpenDoor, Linkedin, Tesla and more. In Israel, the Check Point team went on to build Imperva, Cato Networks, Hyperwise and more. In each ecosystem, within a decade, a distinct tipping point was reached: an initial cohort of operators took their experience, networks, and capital to found another generation of companies.

Such is the virtuous cycle of tech! 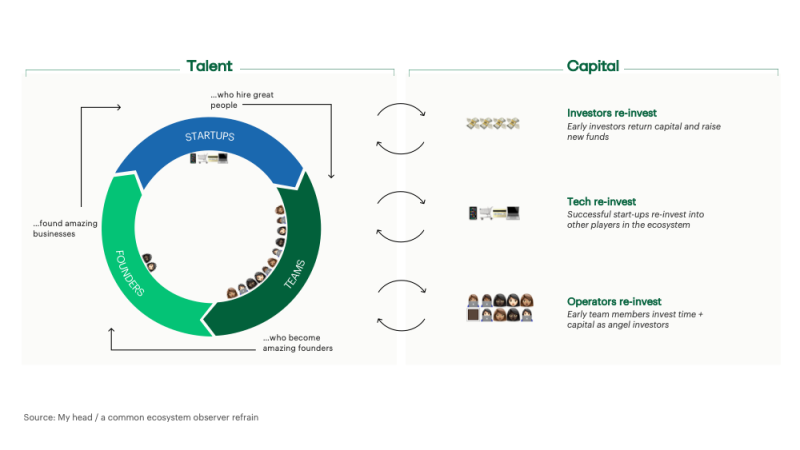 From my limited observations so far, the Southeast Asia ecosystem is at the very start of this journey.

Let's start with talent. Over the last ~four years, there's been an increasing number of founders starting businesses after working in a SEA-grown tech unicorn–over 200 new startups last year alone. And while having worked in a high-growth startup does not determine success for a new startup, a successful startup is a unique incubation environment that teaches skill sets and competencies that are hard to get elsewhere. 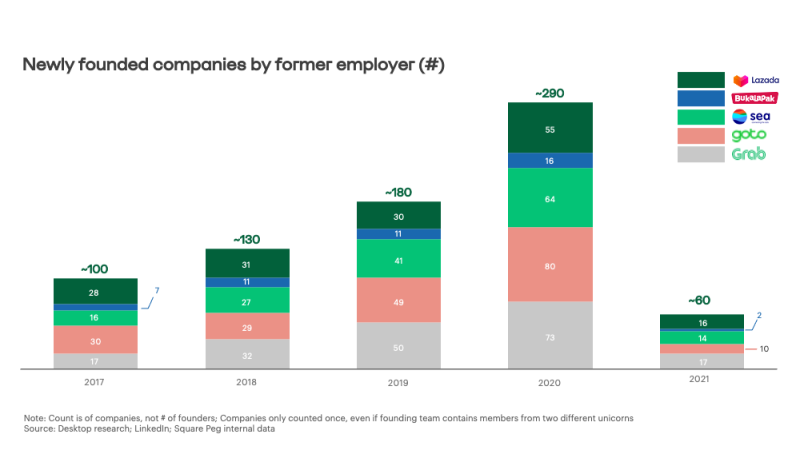 Already this year we’ve met over thirty companies whose founders previously worked at a unicorn from the region. We are also meeting more and more senior operators who have transitioned between startups; senior execs are excited to hit 'restart' on their tech journey – taking a suite of learnings (good and bad!) and backing a new vision for the future. Whether it's founders or early team members, the 'initial wave' of tech titans have played a major role – proving there is immense value that can be created across this region and that Southeast Asia tech is a force to be reckoned with on the global stage. This in turn, reduces the perceived risk of founding or joining an early-stage startup in the region, which is important for widening the talent funnel. Given the upcoming liquidity events - looking at you, Grab - I expect a bigger wave of exceptional talent and smart money to flow out of the initial wave of tech titans and create new waves of success as tech startups come of age across Southeast Asia.

Just as the ecosystem benefits from exceptional talent - the flywheel of capital starts spinning. This can be said of tech unicorns, early operators and founders, and investors alike.

In a mature tech ecosystem, a vast amount of capital is reinvested into the ecosystem by successful tech companies. Often this is in order to secure new talent, capture a new distribution channel, establish new offices, hire local agencies etc. If we look to a market like China, companies like Tencent, Ant Finance, Xiaomi, to name just a few, are prolific investors back into the tech ecosystem. Xiaomi has invested in >300 companies as of December 2020. This is an extraordinary number of investments. Their impact has also been felt locally, as we've seen with Alibaba's acquisition of Lazada; Tencent's material ownership stakes in SEA Group, GoJek (now 'GoTo'), or Didi Chuxing's investment in Grab. More importantly for the continued growth of the local ecosystem, we're seeing local players reinvest into the local ecosystem. Whether that be through dedicated investment vehicles, leveraging their unique brand and distribution channels (e.g. Go-Ventures) or direct strategic investment (e.g. Grab & Ninja Van)

As with talent, we expect this to only continue. Adding fuel to the fire, SEA Group has recently announced $1B of funding for SEA Capital, via the acquisition of David Ma (former Hillhouse Capital Partner) shop Composite Capital Management. Game on!

Similar to the maturation of the 'initial wave' of tech companies in the region, early employees and founders of these companies are now actively re-engaging and reinvesting their time and hard-earned cash back into the ecosystem. This comes in many forms, but most notably through angel investments - bringing not just capital but a Rolodex and depth of expertise to the table. Initial angel networks have been set up in the region, such as 'XA Network' and most recently 'Fintech Angel Operators', as a greater number of former (and current!) operators + founders want to engage with early-stage startups and learn the Angel investing art form! Once again, I expect this to only increase as operators take advantage of liquidity events across the region and as the ecosystem matures to have more opportunities for secondary events (i.e. a dedicated fund that only buys 'secondary shares' from employees)

The same sequence of events is playing out for investors in the ecosystem - what starts as a small pool of capital grows as early founders you've partnered with build exceptional companies, and your investors (yes, VCs need to fundraise too!) gain confidence in your track record and ability to manage their capital. 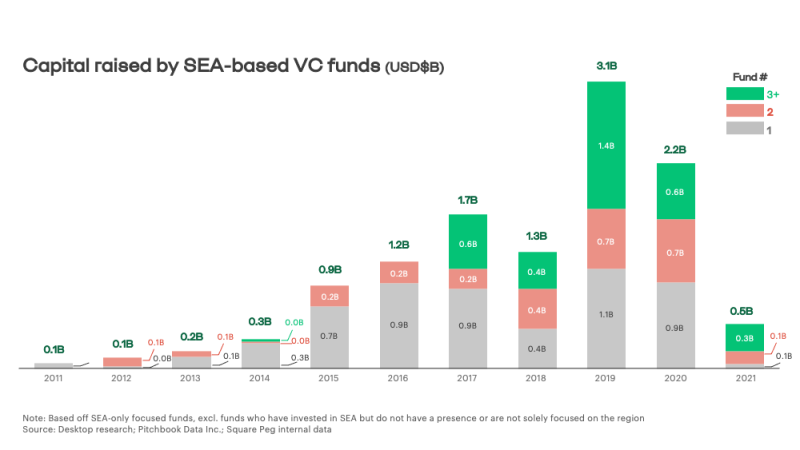 From these initial pools, more funds across Southeast Asia have begun to raise second, third or even fourth pools of capital - typically of increasing sizes. All the while new funds being started in the region (see 'Founders & operators reinvest' above)… and this doesn't even account for investors from outside the region moving in.

This phenomenon has been true of our journey so far at Square Peg - we were initially formed ~[9] years ago as 'Victoria Capital' with a bunch of special purpose vehicles. Fast forward to earlier this year and we'd raised our 4th pool of capital - at ~US$450M, returned over US$400M to our investors and, after many years of investing remotely, opened up an office in Singapore.

It's great to have aligned LPs (investors in Venture Capital funds) continuing to double-down on the sector and reinvesting their distributed capital back in. Even more so, going back to the very start, none of this would be possible without exceptional founders building amazing, enduring businesses.

The beginning of Wave 2.0

The ‘why now’ for Southeast Asia tech is upon us. And Wave 2.0 has a nuanced and ambitious streak that should make us even more excited: founders looking to build globally dominant companies, a deeper and more connected talent pool and an influx of international capital to join alongside local funds.

But it’s clear that the ripples from Wave 1.0 - the OG tech titans from the last 10 years - will influence the ecosystem for years to come. And I, for one, feel immensely privileged to be a part of this very special ecosystem right now, right here in Singapore - and once borders open up, in different cities across Southeast Asia.

Our particular flavour of investing is very focused on the people and understanding their vision, so if you’re a founder that’s early in your journey, or an operator thinking about starting out - then please do reach out. I’d love to meet you.

Similarly, as a relative newbie to Singapore - not even one year in - I’m always looking to meet brilliant, kind people who can build my understanding of the region. If you have any recommendations for people to know, or have any feedback on this article then I'd love to hear from you - my email's ed@spc.vc

*All numbers are USD; all data is as accurate as I can make it, all views are my own.